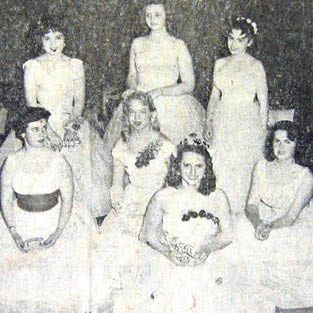 Image is in the public domain via HISTORICPATTERSON.ORG

The Miss Putnam County pageant was an annual event, often used as a fundraiser for charitable causes. On May 9, 1958, a dance was held in Patterson Town Hall on Main Street (NYS Route 311) to collect votes for Patterson’s representative to the pageant, Miss Shirley Hudson. The total “votes” were based on the amount of money collected at the dance, with the proceeds going to disabled veterans in area hospitals. The votes would be counted at the County pageant on May 14, with the winner receiving the Miss Putnam County crown. The dance was sponsored by the Sgt. Ronald Grey American Legion Post, and music was provided by the Frank Woron band.

The coronation dance was held on May 14 at Quigleys in Lake Carmel, with Frank Woron’s band providing music for the event. The master-of-ceremonies was Commander Royce Hall of the Sgt. Ronald Grey Post in Patterson. Patterson’s Shirley Hudson, representing the Sgt. Ronald Grey Post, was crowned Miss Putnam County. She was crowned by Miss Patricia Litz of Putnam Valley, who was Miss Putnam County, 1957. Her prizes included a diamond ring.

Patterson’s Shirley Hudson, Miss Putnam County, 1958, is pictured in the foreground of the group photo, which was published in the May 22, 1958 edition of the Putnam County Courier.