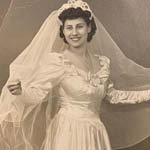 Rose Muro Federici passed peacefully in her sleep surrounded by family, after a valiant battle with cancer. Loving wife, mother, grandmother great grandmother, and Aunt, she was lovingly known as “RoRo.” A limited service (due to COVID) and internment at Raymond Hill cemetery was held on May 30. The family will celebrate her life with a larger gathering in the near future.

Born and raised in the Bronx, the daughter of James Muro and Christine née Macchio, Rose met Ralph Federici, the love of her life at the young age of 15. Inseparable from the start, she and Ralph married in 1948. Together they raised their family in the Morris Park section of the Bronx before relocating to Putnam County in the mid 2000s.

A lifelong administrative professional, Rose retired from full time work in the late 90s and the two of them became avid travelers whose adventures took them around the world. She spearheaded bus rides to local casinos and dinner theaters where the ride was equally enjoyable as the destination. An avid bowler, she was instrumental in starting a league that ran for more than a decade.

Rose was a very active member of the Columbiettes, an auxiliary to the Knights of Columbus. She served as the President of the New York State Chapter, a role she served with dignity and purpose.

Truly a woman before her time, Rose instilled in her family the importance of truth, standing up for what is right, respect for all, finding and using your voice, and the value of a faith-based life.

Her family was the epicenter of her life. Mother to three daughters, grandmother to five and great grandmother to six, Rose was predeceased by her first daughter, her siblings and various family members. She is survived by Ralph, her loving husband of 72 years, her daughter Gerianne (Jerry) O’Rourke, Lake Carmel, her daughter Vickie (Jim) Causa, Carmel, her grandchildren and their spouses and her precious great grandchildren.

RoRo will be missed by all who knew her. But the memories she leaves behind will keep her alive in our hearts forever