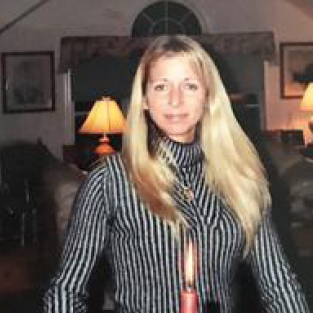 June Ann De Luca, 58, of Croton-on-Hudson, New York, passed away peacefully at Phelps Memorial Hospital in Sleepy Hollow, NY on Monday, October 12th, 2020. She had courageously battled lung cancer from the time of her diagnosis in early January.

June was born on April 10th, 1962, at Ft. Bragg, NC and grew up in nearby Fayetteville, NC. The youngest of 6 children, she was the baby girl. She lost her father to the Vietnam War when she was just nine years old. Tragically, her mother died just three years later. From then on, her oldest brother, Eddie cared for her until she moved to New York where she lived for the rest of her life.

June had a heart of gold. She loved lavishly and made sure everyone felt special. She had a magical way of making everything ok. People were drawn to her warmth. She brought joy and comfort to all who were blessed to have known her. She was a phenomenal cook. Her passion and care for others showed in her work as an interior designer. She had an extraordinary love for animals. Her energy was love.

To know June is to love her. She was a go- getter who never stopped. She loved her family and friends and would have done anything for them. June was always willing to lend a helping hand. She loved her sons more than life. It has been an honor to know her. She loved to watch scary movies and spend time with family and friends. You could always count on laugher when you were around June. She will be sorely missed by all those who have known her, especially her family.

June counted her friends as family and has left her love with so many.