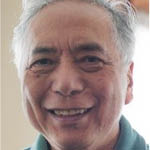 John (Johnny) Negre Aragones, M.D., passed away with his wife by his side in Newtown on April 24, 2020. A long-time resident of Newtown, Johnny was a Doctor of Psychiatry a husband and father, a philanthropist, a gentleman, a leader in his field, an advisor and an example to his friends and family.

Born in Cagayan Province, Phillipines on January 30, 1928 to his loving parents Juan and Serapia Aragones, Johnny was the 1948 class valedictorian from the Thoburn Memorial Academy in Sanchez Mira, Philippines, a school which his parents established at the end of WWII. He went on to graduate from the University of The Philippines Medical School in 1955. It was then that he left his proud parents, and his seven siblings (spouses): Soledad (Rolando); Erlinda (Bonafacio), Jaime (Elisa and Brigida), Benjamin (Lynda), FeClara, Paz Caridad (Ric) and Napoleon (Lydia) and moved to Connecticut to complete his residency at Griffin Hospital in Derby.

From Griffin he went to work at Fairfield Hills in Newtown where he met his partner for life Madeline Margaret (Sis) Martinez, a Registered Nurse who graduated from the Danbury School of Nursing. Johnny and Sis were married on December 12, 1958 and worked together at Fairfield Hills for many years.

Johnny placed great value on education and its importance in allowing one to achieve all they could be. He was a lifelong supporter of local schools and his children and family cherished his insights and support in their education and their chosen paths.

In addition to education, Johnny was also a nature lover along with his beautiful wife Sis, in 2002 they worked with the town of Newtown to transfer 21-acres of their property now known as The Pole Bridge Property Trust where residents still enjoy the nature trails.

Once he retired to their Boggs Hill home in Newtown, Johnny further embraced his love of gardening and built a greenhouse to bring the gardens inside during the winter months and enjoyed spending time with Sis and his three sons and their families.
Johnny is survived by his wife Madeline (Sis), and three sons: Jonathan (Jon) New Milford, CT; John (Jack) of New Fairfield, CT and wife Mary, and their daughters Sara and Samantha (Evan) and great-grandson Henry; and James of Clifton Park NY, and wife Amy and grandchildren Jacob, Jillian and Joseph as well as his sisters Erlinda and Paz Caridad and many loving nieces and nephews.

Donations can be made to the Alzheimer’s Foundation of America https://alzfdn.org/support-us/donate/, the Newtown United Methodist Church Missions https://www.umcmission.org/give-to-mission or maybe just plant an extra flower in your garden this year in memory of Johnny.

All services and interment in Raymond Hill Cemetery, Carmel, NY are private. A Memorial Service will be held at a later date in the future. Honan Funeral Home, 58 Main St., Newtown has been entrusted with funeral arrangements. To leave an online condolence visit www.honanfh.com